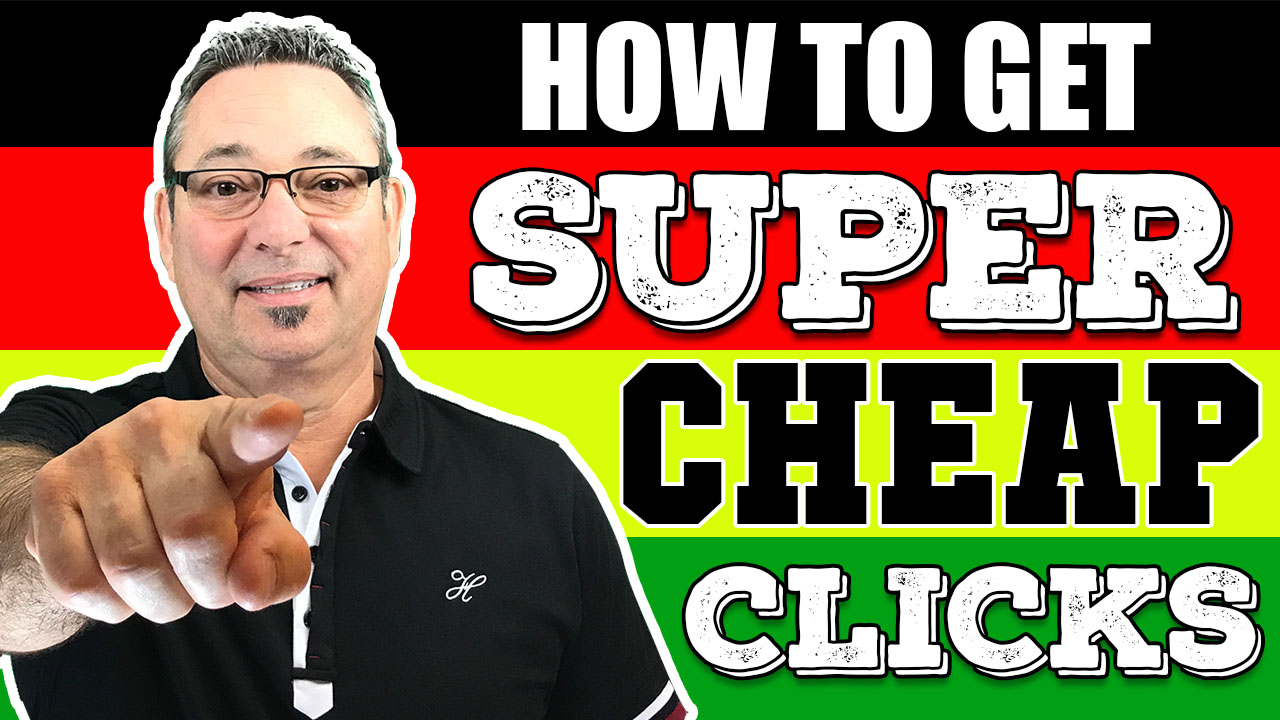 OK so super cheap clicks right been talking about that a little bit.

And we all will. What do we want them? Because we want people coming to our site. We want people come into our product pages. You know we want people you know. And shoot SEO’s takes forever. Right. I mean. You can work on that for years and still never get on the first page. So. Facebook has allowed us to target people. And that’s a cool thing. We can actually run ads to targeted people and get the results we want. And the first thing everybody wants is a lot of traffic.

Right. A lot of traffic. Well traffic is easy. I mean if you if you just want traffic. You can get traffic for peace.

I mean you know the way Facebook works is they got this thing called a pixel and that pixel learned people. OK. And there’s you know millions of pixels. I don’t know how many pixels are out there for different companies different pages. But there’s a bunch of them. And what they’ve done. Is these pixels have figured out who does what. OK. They figured out who is it that likes post. Who is it that shares post? Who is it that clicks on post? Who is it that buys products? And Facebook got this information. Only thing you have to crack the code of is getting your offer in front of these people. Now. I’m probably like you are. When I first got started I thought you know write a Facebook ad. And you know these likes you know they’re a lot cheaper than conversions. I mean golly. I mean if you optimize your ad and you say I want to go for conversions I want to go for people who buy products. Wow. That’s a lot more expensive right. I mean that’s that cost you some money. But if you want to just say I want traffic. You can get it for pennies. I mean I’ve done that. OK. And you start to rationalize you say well.

If I get enough people come in there somebody is going to buy it right. It’s not it’s not like I’m going to get thousands and thousands of people come. You know and nobody buy. You know what. You’re wrong. OK. So here’s the truth. You can optimize for traffic. You can optimize for likes and shares and comments and all that. And guess what you’re going to get Facebook smart. You will get likes and comments and shares but you will not get buyers. You’re not gonna get buyers. You say well JR. But if I said enough traffic surely somebody has to buy. It’s possible. Not very likely. Because Facebook has figured this stuff out guys. You’re not smarter than Facebook you’re not going to trick Facebook and say well you know if I just drive enough traffic I’ve got such good offers and there’s they’re so awesome that these people are gonna buy. Now because Facebook has already said these aren’t buyers but they will like your stuff and they will visit your page because that’s what they’ve seen them do in the past they know who these people are. You know there’s like millions of users and you don’t figure that Facebook hasn’t figured this out. They know exactly. So whatever you’re optimizing for if you if you want add to cart.

And you say you know Facebook I want ads to cart this that’s what the picture now. You’ll probably get people who add to cart never end up buying them. So how did they do that. Because they’ve got billions and billions of you know. Sessions of data and they know what these people are doing. So if you’re trying to optimize for likes that’s what you’re going to get.

So here’s the real piece of gold right here. Here’s the thing that people miss is there’s two parts to this.

It’s not how much traffic you’re getting. It’s not you know these people aren’t buyers. It’s you don’t have a good product and then what’s the second part to the second part this is the other piece of gold in here. The second part is you have to get it in front of the right people. So that doesn’t mean picking an audience that is really broad in selling your ad out there because it’s not gonna work. I mean it could work a little bit but not for long and not for much.

You have to really drill down and get in front of the people that want your product. OK. If you’ve got the right audience and I tell you when we do ads we start off with about eight or 10 audiences I’m doing one right now and we have 22 different audiences on that.

And the 20s your audience is you having good ones I have for more than 20 percent so people so often will try to run an ad and they’ll pick an audience and one audience. I can almost guarantee this will be a failure or they’ll pick two or three and they spend two hundred dollars and they go Welch no good. Well here’s the deal I always lose money upfront why do I always lose money because I don’t know which audiences are gonna work when I put a new product out there.

How would I know. You know the only way to do that is to test and only way to do that is to spend some money. Okay. So what I do like this. This last one right down here here here some landed on me but this last one we did twenty two audiences and spent twenty one hundred dollars out of that twenty one hundred we’ve only recouped about six hundred dollars. So you say well that’s that’s terrible. You lost fifteen hundred bucks now because I know which ones are going to buy now. So that fifteen hundred bucks that was learned money. Now the ones that paid me the six hundred bucks I can now up all those ads because those can work really well and the products that I put in there. The one in particular that I’m talking about now is a book and it’s a it’s a PDF book. So it’s a downloadable a zero cost and it’s five dollars and sixty cents. But my average heart value is 24 05 when you said well how could average could be twenty four o five if your product only sells for five dollars and sixty cents. Because I’ve optimized it and here’s how I’ve optimized it. I’ve put a bump on there.

So when they get that book if they want to get the book that’s fine that’s five hours 60 cents but if they want to get the audio version of the book that’s another nine dollars. OK so that upped my possibilities to fourteen dollars and 60 cents. So how do I get to twenty four o five after they buy the audio? I’ve got a one-time offer at one time offer is a split page actually. One of them goes to forty seven dollars and one goes to ninety seven dollars. So we sell enough of those to where overall the average person against the funnel twenty four o five the four audiences that are doing well for me now and that range from cash fifteen dollars to six dollars and eighty nine cents. Cost per acquisition of a customer. So as you see I’m tripling or doubling my money you know pretty much in there out of this for audiences.

So that’s pretty good. So I’ve spent the money to figure out what’s going to work and then I could just take that money and just put it in the audiences that do work. That’s the method you got to use. You cannot cannot cannot pick one or two audiences have a product expected to work. Now if you pick eight or 10 audiences and you don’t get any sales in after three days you run in five or ten dollar ads you’ve got a bad offer. Right so wrong are you. Or if they’re clicking on it they’re not buying you’ll know that your ad is good but your offer is bad. So you know there’s only a few parts to a funnel turn around here because I know I get too far out here in this part. There’s only a few parts to the funnel. You’ve got your offer page right. What are you selling? Is it good? You know what the price all that good stuff is.

And then you’ve got your actual ad. OK. And your ad is you know whatever you put on Facebook it can be an image you could be a video and you got your ad copy of course that’s all part of the ad and then you got your audience. So it’s simple really really simple. If you’ve got a good audience OK you’ve got some audiences you don’t know which ones gonna be good yet and you’re not getting any clicks. What does that tell you? Because your ads are no good. OK. That’s the problem with that. Now if you’re running ads and you’re getting clicks but they don’t buy your product when they get there it tells you you’re offers bad. It’s this this is really simple stuff to fix. Then if you’re not making enough per sale right. Let’s say you’re you’re getting the clicks that go into your page they’re buying your product but you don’t make enough to cover the ad. You’ve got to look at make sure you’ve got a bump right a little bump offer on that particular product and you’ve got to make sure that you have a one-time offer.

You know something that’s more expensive they can buy after they bought the first product. They’re never more likely to buy a product from you then when they just bought a product from you. OK. So the people that are taking my forty seven or ninety seven dollar offer just spent five dollars and sixty cents or 14 dollars and 60 cents. So they’re there already spend money with they’ve already bought in. So they’re pretty likely to take the next offer. That’s when you want to get it. You know if you wait and send him an email and say hey I guess I’m not going to sell you. That’s going to be a bit cooler then. So it’s better to do it right then. So I hope that helps you out you can get cheap clicks, clicks are easy to get. But if you really want to sell products you’ve got to use the conversion pixel to make sure you’ve got all the codes on your pages to so that Facebook can optimize things you know and checkout page make sure you got to check out you know code on there. Make sure you get your pixel on your page make sure you get your conversion code on thinking Page. If you don’t have those things set up Facebook can optimize your pixel. All right. So Facebook is going to look at every stage of this and if you have all those codes in there the way you should and you’ve got the pixel set right and you only use one pixel per niche you’d have seen people screw this up to where they actually have one pixel but they’re running ads to four different niches. Well that just confuses the pixel.

So that’s my advice to you today. All that cheap clicks right it’s all about making money. It’s all about return on investment. Talk to you guys soon.