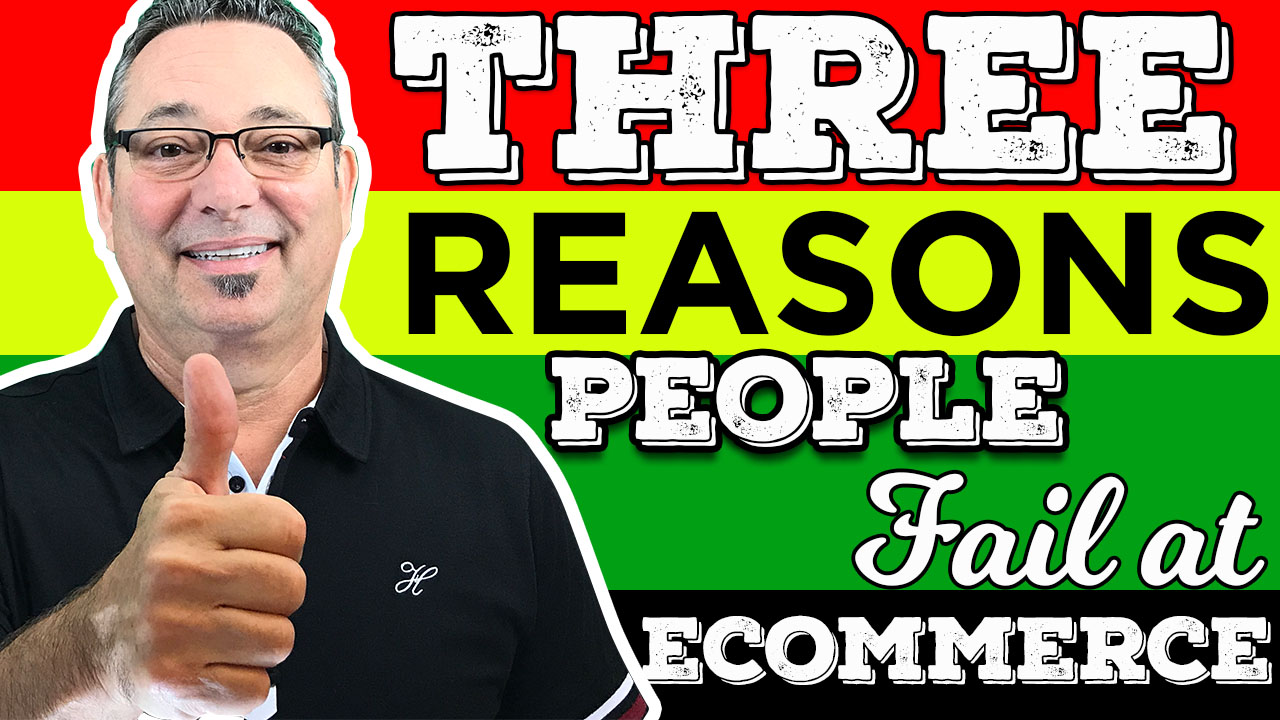 “Hey everybody. J.R. Fisher here. It’s a beautiful Monday morning here at the lake. Can see that behind me there see’s some of that. So I want to tell you the 3 reasons that people fail at e-commerce. And I say I want to tell you. Three reasons. I don’t want to. I’m not trying to say I’m going to tell you the three reasons because there’s probably three hundred reasons but these are three big ones that prevent a lot of people from really succeeding so I just want to share this with you this morning.

Now the first thing is everybody so excited to get started. They want to get going. They want to get their store go and get their store up. And that’s probably the biggest mistake you could make because hurry in to get that store up usually means that you’ve done a lot of things wrong. You know the landing pages are wrong. The pictures are wrong the descriptions are wrong it’s all wrong. And you end up with a store and then you get discouraged because nobody buys anything off of it and the next thing is picking their product.

A lot of people just don’t get it. You know they pick products they like or products they think are cool and nothing could be worse than that because I don’t know you I don’t know what you’re doing right now but your view of things could be vastly different from what people really want. And if you’re just picking what you want it really doesn’t matter. The whole point. And you know I think back when I first started my e-commerce business and you know we’re still in survival and you know for a little while we sold cell phone cases but it never worked.

So. We had a lot of different survival products from different people. And we have some now. But I can tell you none of the products we have now are the ones we originally started with. Not one not one. So you know that’s kind of insane if you think about it. Because those products weren’t good or they didn’t sell enough or there wasn’t enough profit margin there is probably a million different reasons for that but you should do a lot more research. On a product than on making your site look cool.

I mean making your site look cool doesn’t matter if you have the wrong product and if you got a really cool looking site it’s beautiful and awesome and the products aren’t what anybody wants to buy. What difference does it make. I mean really it makes no difference at all. And the last of the three that I would tell you about is you know where your traffic’s coming from because you know you could you could have a really nice site and you could have really great products and if nobody sees them it’s not going to matter.

I mean nobody’s buying this stuff right because there’s nobody there. So you know that’s an issue. And then when people try to drive traffic you know the first thing they want to do is they want to get free traffic. Everybody wants free traffic and all although free traffic is great it takes years to get it. I mean we get some free traffic now and people buy stuff from me because they know me and they’ve seen my products out there but I couldn’t have done that in the beginning. I mean there’s just no way a lot of people say why does want to post a bunch of social stuff and I’m going to get free traffic and you know I’m just to the point after nine years where I can post social stuff and get some immediate results like right now doing this video.

But you know in the beginning nobody knows you. They don’t know your product and you’re probably going to have to spend some money and that’s just the way it is. And in the beginning when you spend money you’re probably not going to make money because you’re pixel. You know if you’re if you’re advertising on Facebook it doesn’t know your audience it doesn’t know who these people are and it’s trying to figure it out. And the only way you can really figure it out is if it gets data and data is people going through your funnel data is you know when you run that ad people land on your page they buy your product or they don’t buy your product.

You know you’ve got to have all your codes set up you know your add to cart codes and you you know landing page codes and your pixel and conversion codes and once all of those are in place and you start making some sales then that pixel can say oh this is the kind of people you’re looking for. You know this is what you want. And until you do that until you spend some money on this your odds are not good. I can tell you they’re just not good. It’s not going to happen.

So you’re going to have to spend some money. So you know those are the big three things don’t rush to get your site up you know make sure you’re you’re doing more research on your product than anything else. Make sure you have a good product. And thirdly you’re going to have to get some traffic. You have to some money now. That last part about you know getting traffic you can get some training on that. I do training on that. So there you have it three reasons out of the three million reasons why people fail with e-commerce business they get discouraged and they quit.

Yeah. You know I get it. But you got to keep trying. You got to keep research and buy a course. Heck we have courses by those or find somebody else you like that you know. Has courses. But keep in mind we do have courses and I do all of those courses. So if you if you want training in that area you know you can PM me or you can you know joint join our Facebook group. That’s that’s a great thing to do. There’s a lot of free training there.

That’s called The Art of e-commerce success. So if you go to Facebook and type in the art of e-commerce success you’ll find it. And we’ve got a few questions. We don’t let everybody in the group. Right. We don’t want spammers in there. But you can put in your information and if you get approved you can go in there and you’ll have access to all kinds of training videos for free so check that out. And I will talk to you very soon. Have a great day.”